This part of Marsden Pt Oil Refinery was a hive of activity as around 2,746m3 of concrete was poured over 16 hours to make the base for the refinery's $365 million Continuous Catalyst Regeneration Platformer project.

The folk at NZ Refining, which run the Marsden Pt Oil Refinery, have the answer - the base for the refinery's $365 million Continuous Catalyst Regeneration Platformer project.

The $365-million CCR project will lift the refinery's capabilities to 80 per cent of all New Zealand's fuel needs, providing a more reliable fuel source. Building work will also create about 300 on-site jobs and hundreds more off-site over the next four years.

On Saturday a convoy of 60 concrete trucks took 550 separate loads over 16 hours to pour 2746cu metres of concrete into a hole 1.5 to 2 metres deep for the base.

The pour - believed to be one of the largest single-day concrete pours in New Zealand - started at 3.30am on Saturday and continued through to 9pm, Refining NZ communications and external affairs manager Greg McNeill said.

"There was 2746cu m of concrete poured to a depth of between 1.5 and 2 metres. Around 550 separate concrete truck deliveries were required from five batch plants in Whangarei and Ruakaka - using a fleet of 60 trucks," Mr McNeill said. "At any one time there were 15-20 trucks on the refinery site, with a truck delivery to the concrete pour about every 90 seconds."

He said, having completed the pour, the concrete base for the refinery's new CCR unit will be carefully monitored over the next four weeks until the concrete is fully cured. 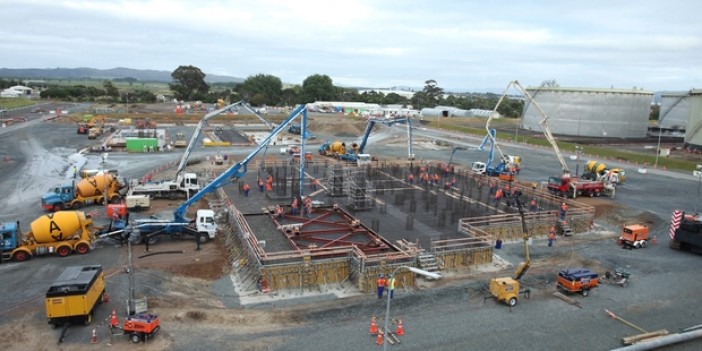