Allied Concrete received the 2016 New Zealand Ready Mixed Concrete Association Extra Distance Award for supplying concrete for the construction of the 5,800m2 Remarkables Ski Field Base building and Curvey Basin Chairlift in what was an extremely challenging project during 2014 – 2016 off season.

Allied Concrete Queenstown supplied over 2,900m3 of concrete, with the majority a 30MPa 6% air entrained mix to deal with the freeze thaw conditions, and with an hour travel time was retarded. It was a 50 kilometre round trip, with the last 13 kilometres a steep climb on an unsealed road to the existing Base Building at 1600m above sea level. Access up the mountain was up an even steeper 1.6 kilometre climb on a ‘Cat Track’.

Stage 1 involved supplying concrete for 12 tower bases and two return stations on the new chair lift. Both return stations required around 75m3 of concrete in one pour. With the top station over 1,900m above sea level it could only be supplied in 3.5m3 loads due to the steep gradient of the access road. 6m3 loads were taken as far as the Base Building where they were then transferred into smaller trucks to access the top of the mountain. All the towers were accessed by truck on the mountain taking up to 20m3 per tower again in maximum 3.5m3 loads. 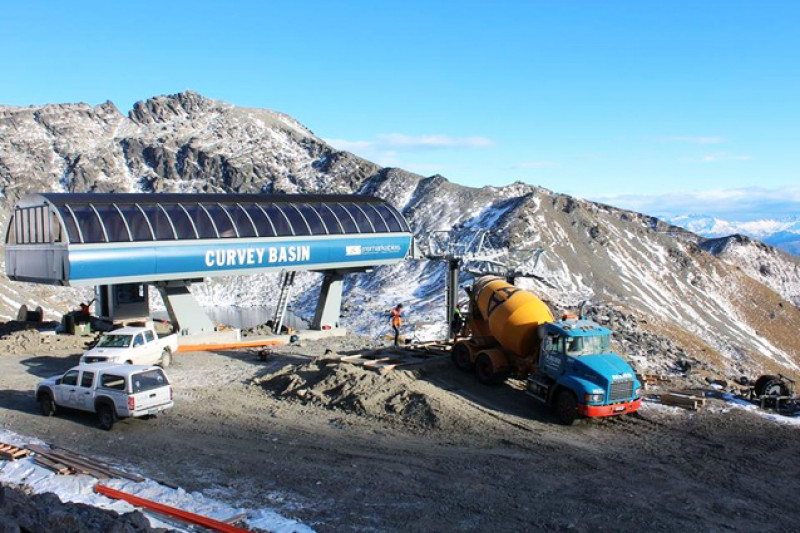 Stage 2 involved supplying 2,400m3 concrete for a new Base Building (1,600m3 above sea level) at the Remarkables Ski Field over a 6 month period. The biggest pours where around 100m3 , but the main hurdle faced on Stage 2 of this project was the weather.

Once the Remarkables Ski Field had closed at the end of the 2014 season and excavations had begun for the new Base Building the mountain was hit by frequent weather systems that included numerous snow days. During the last month of the project winds regularly reached up to 150kph. In total, 42 days were lost to inclement weather on the project.

There were at least four occasions when trucks were lowered off the mountain tethered to a 17 tonne loader equipped with a full set of ice breaker chains.

During the last month of the project Allied Concrete Queenstown was required to work 21 days straight to complete this project as there was a real danger that the Base Building would not be finished for the new season, meaning the ski field would have remained closed for the 2015 season.

This required careful management of staffing levels to not only supply the project but also maintain supply to other customers over a very busy period. Compliance with all heavy license restrictions, driver hours and days off were also non-negotiable.

Further challenges were presented during both stages of the project was the deterioration of the ski field access road. High volumes of heavy vehicles throughout the build caused massive corrugations in the road which on the return trip with an empty truck led to a number of issues with the fleet.